MINDFULNESS AND THE QUALITIES OF AN INTERIM EXECUTIVE

“Mindfulness involves paying attention… on purpose, in the present moment with curiosity and kindness …to things as they are” Dr Jon Kabat-Zinn

Are you worried about your mental health or that of others in this unprecedented pandemic era? It certainly seems like a pivotal moment to share and harness the power of Mindfulness. A fashionable word in recent years, this is a great opportunity to revisit exactly what it means and to shed some light on the very practical benefits it can bring – to individuals and to humanity at large. While reflecting on the benefits of Mindfulness it occurred to me that many qualities associated with Mindfulness are extremely useful to cultivate as a successful interim executive. Think of Mindfulness as mental training, just like going to the gym is physical training. In essence, it is meditation in a secular guise. Take a look at this diagram to understand both its simplicity and the complexity of its impact.

Beginner’s mind – Mindfulness practice teaches that every moment is a new beginning and if this principle can be applied to any new transaction or interaction encountered by an interim executive the results can be spectacular. The juxtaposition here is a deep well of experience combined with a truly open mind. You can leave the baggage of the past and the concern for the future behind as you deal with the present moment and its requirements, fully engaged and with no bias. Watch this video where Narayana Murthy of Infosys talks about Professor Krishnayya at the Indian Institute of Management who taught him the concept of starting at zero every time.

Curiosity – Engaging with one’s own feelings and those of others with curiosity and openness is an essential Mindfulness practice. The intent is that nothing is suppressed, that one puts the welcome mat out for all emotions as suggested in Rumi’s poem The Guest House. This quality of curiosity can lead to unexpected and insightful outcomes in any situation encountered by an interim executive.

Reflection – Every group Mindfulness practice ends with a reflection period where thoughts and feelings are shared. The ability to ask and answer what went well, what went badly and how one can improve is a natural part of the mindset of a successful interim. Such reflection built into any task that an interim executes is mandatory at X-PM – we build in an extra layer of this kind of reflection on a periodic basis with both the client and the interim.

No judgement – This idea, of keeping judgement at bay is a particularly hard lesson to learn because it involves the ego. As human beings our natural instinct is to give our egos prominence. Mindfulness practice teaches us that this is counter-productive to the world at large and also to each of us as individuals. When an interim assignment is conducted with minimum judgement and maximum discernment the outcome is always more inclusive and harmonious.

So, if you want to have more energy and enthusiasm for life, a greater capacity for relaxation, enhanced self-confidence and a stronger connection to others, to yourself and your purpose I invite you try Mindfulness. I am not saying it is easy – it requires sustained, daily commitment and is a lifelong journey but there’s no time like the present to join a public health revolution in the making. The triumvirate of fear, anxiety and guilt combined with ruminating about the past and catastrophizing about the future are rampant in us as humans. Mindfulness reminds us, in the words of the Persian poet Omar Khayyam to “Be happy for this moment, for this moment is your life” – words to live by, in these surreal, unpredictable times – especially so, as we at X-PM tackle interim assignments involving crises, turnarounds and discontinuity.

We hear a lot these days about Mindfulness and how it can be applied in the corporate sphere. I would like to share my personal Mindfulness journey as it might provide some insight. It was early 2013. I had been searching for drug-free tools to help our mother with depression when my brother mentioned that he was involved in a clinical trial at University College Hospital in London for the benefits of meditation. He had been given an app to use called Headspace so I signed up and started using the app 10 minutes a day, every day for a month.  The following month I just stopped and was shocked at the negative change in my emotional equilibrium. I was more irritable, more anxious, less resilient. I have meditated every single day for a minimum of 30 minutes ever since. It has changed my life.

Having stumbled upon a simple, free tool that could enhance all our lives, I started to research why more people don’t meditate. Instinct told me it might be important to strip away any excessive religious and philosophical aura that surrounds meditation and perhaps try and explain the neuroscience to make it more appealing to more people. This is what led me to the work of Jon Kabat-Zinn who set up the Mindfulness movement in the 1970s. He drew on ancient wisdom from contemplative traditions such as Buddhism and the writings of philosophers such as J. Krishnamurthi and made it applicable in a contemporary context. In the clinical setting of the University of Massachusetts Medical School he developed an 8 week programme called Mindfulness based stress reduction (MBSR) for people with chronic pain. MBSR training is considered the first step to learn Mindfulness formally.

I subsequently enrolled for a Mindfulness Based Cognitive Therapy (MBCT) course at the Oxford Mindfulness Centre (OMC), a partnership between the Department of Psychiatry at the University of Oxford and a local hospital. MBCT was developed by Zindel Segal, Mark Williams and John Teasdale, based on Jon Kabat-Zinn’s MBSR programme. I have since trained with the Mindfulness in Schools Project in London to teach Mindfulness to 11-18 year olds.

In this lockdown period, Mindfulness practice has given me a daily routine to anchor my mind and body when confronted with overwhelming feelings. Close confinement can exacerbate any kind of conflict in the workplace or the family. Emotions need to be aired, experienced and ultimately, held lightly. My practice reminds me that I can’t control what’s happening to me or around me, but that I can always choose my reaction. It also remains a gift of loving kindness to myself in the form of self-care.

The amygdala is the oldest part of the human brain responsible for the fight/flight reflex. Sustained mindfulness practice teaches you to use the executive function of the pre-frontal cortex efficiently instead of the amygdala to control behavior. Mindfulness also activates the insula to develop more empathy and the constant focus on observation and awareness is called metacognition.

In 2011 Sara Lazar’s team at Harvard found that 8 weeks of MBSR decreased the cell volume in the amygdala and increased the cortical thickness in the hippocampus, which governs learning and memory and also in other areas of the brain involved in mood regulation. The phenomenon of the brain being able to reorganize itself constantly by forming new neural pathways is known as neuroplasticity.

There has been exponential growth in research supporting such findings from a variety of leading academic institutions around the world and this has been a key driver in bringing Mindfulness into the mainstream. The spotlight on mental health unleashed by the pandemic we are experiencing at present is also going to make the Mindfulness movement stronger as it offers priceless coping mechanisms. Jon Kabat-Zinn himself led a daily practice followed by a Q and A via Zoom every weekday for 13 weeks for thousands of us around the globe and it was invaluable in keeping me grounded. The Oxford Mindfulness Centre (OMC) also has regular podcasts from a variety of leading Mindfulness teachers.

The Benefits of Mindfulness

The key benefit I have noticed is that it allows me what I call the great gift of “The Pause” so that I take time to respond rather than react to situations, knowing that I have a choice. This is best illustrated when I have an argument with my husband! It can apply equally to work situations allowing a more reflective response rather than a kneejerk reaction. It also teaches me to observe my thoughts with curiosity and detachment allowing a certain liberation and space to explore feelings, both negative and positive and to hold everything more lightly. A wonderful analogy from the renowned meditation teacher Christina Feldman is that of a sharp stone in the palm of your hand. You can hold it, gaze at it and move it around but you do not have to cling to it so hard that it hurts you. Another extremely valuable insight is to do with learning not to judge — yourself, other people or situations — such that you are aware of the harmful role of the ego in every situation. I remember reading somewhere that you can choose to be environmentally friendly and recycle or avoid being in a car or plane but the moment you judge someone else for not behaving as you do it’s your ego that’s in play.

Seetha Chinnappa-Sarwal is a Partner with X-PM India, which is part of a global organisation dealing with worldwide executive interim leadership (www.wilgroup.net) and she also serves on the Complaints committee of The India Art Fair. As a Marketing & Communications professional her career has spanned a couple of decades with large Financial Services Technology companies such as Reuters (London, Singapore, Bombay), BT (London) and Sungard (now FIS)(Geneva). She has been a serial start-up CxO, setting up and shutting down a small media company in London at the height of the dotcom boom, on the founding team of the Galle Literary festival in Sri Lanka and as Director of a London based technology start-up. With a keen interest in yoga and alternative health modalities especially in relation to mental health and chronic illness, Seetha is certified to teach Mindfulness to 11-18 year-olds and an itinerant Bach Flower Remedy and Reiki practitioner. 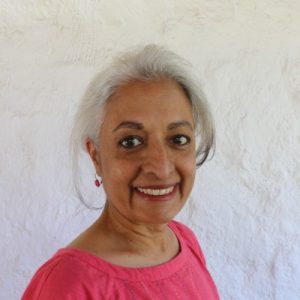